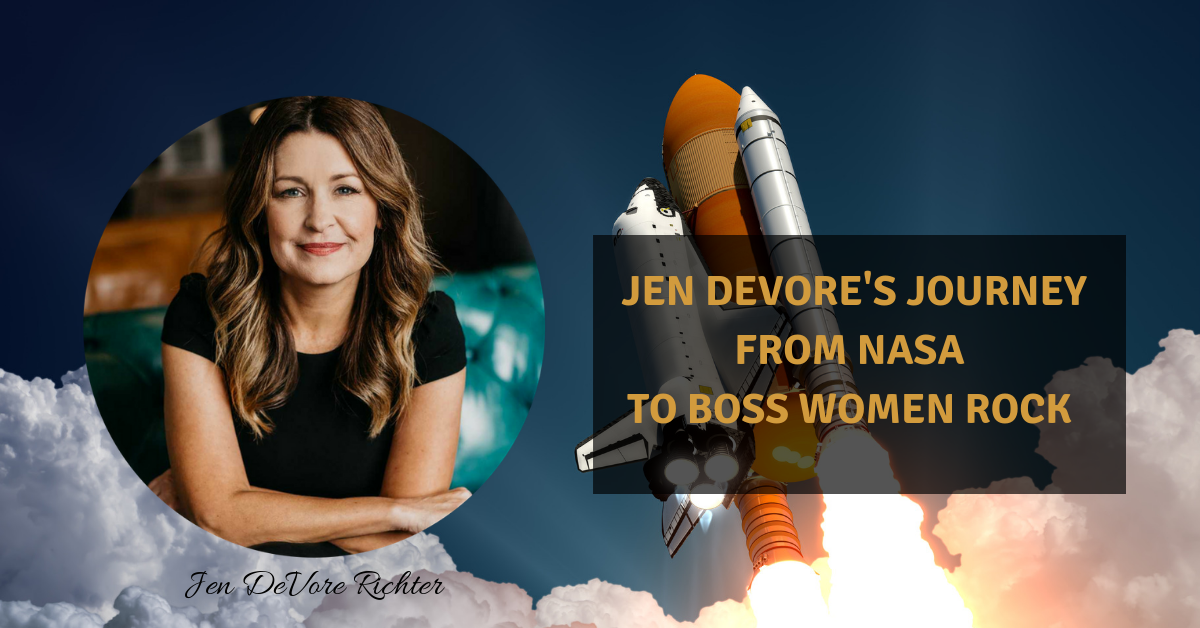 Jen DeVore Richter wants to change the way you think about marketing and she’s got top insights from managing one of the world’s largest brands – NASA at Kennedy Space Center. From 1981 to 2011, Kennedy Space Center was center stage in the world launching 135 space shuttles, deploying the first satellites, International Space Station, Hubble Space Telescope, and many other missions that still impact our lives here on earth today.

You can thank NASA for spin-off technology like invisible braces, Nike shoes, memory foam, Cochlear implants, and even baby formula.

At the height of NASA’s space shuttle journeys in 1999, Jen DeVore Richter was selected to spearhead Advertising and Consumer Research at Kennedy Space Center to ensure that the NASA story was spread worldwide and that the benefits of supporting the space program were understood at home in the USA and abroad. All this was being accomplished while ensuring maximum return on investment and results for the paid advertising budget as NASA moved into the new millennium.

Some of Jen’s duties were lobbying Congress in Washington DC, managing a multi-million dollar advertising campaign budget, and directing consumer research activities on site managing a small team that interviewed millions of visitors that walked through the gates of Kennedy Space Center Visitor Complex each year.

After a three year stint in top management at KSC, Jen learned many valuable lessons about managing global brands that are applicable to any business on earth (or the universe for that matter.) Just walk into any Target in America and you’ll see entire clothing sections dedicated to the NASA brand with t-shirts emblazoned with the NASA logo and pictures of space shuttle launches.

While some Americans would probably think that NASA ‘went out of business’ when they quit launching space shuttles in 2012, it appears that the space program is alive and well with the recent SpaceX rocket stirring up renewed media and public interest.

NASA has been a popular theme, setting, or topic for Hollywood movies with older blockbusters like Armageddon and newer releases like The Martian with Matt Damon.

In fact, the movie premiere of Armageddon peaked Jen’s interest in working at NASA back in 1998.

“I saw the movie premiere on Entertainment Tonight and decided that is where I want to work. So, I made it happen,” said Jen DeVore Richter.

A marketing lesson that business owners can learn from NASA is to stay relevant with strategic partnerships.

They are always mindful of joint venture partnerships with companies and brands that can continue the NASA mission:

NASA’s current and future Earth missions use the vantage point of space to understand and explore our home planet, improve lives and safeguard our future. NASA brings together technology, science, and unique global Earth observations to provide societal benefits and strengthen our nation.

If a more culturally popular brand can help them achieve that mission, then it’s a win-win for everyone.

During Jen’s time as Manager of Advertising and Consumer Research at Kennedy Space Center, one of the key priorities was using research to make decisions about marketing.

Nearly every day of the year, there was a small team of 2-3 researchers on-site to ask questions of the visitors who travelled from across the globe.

They would conduct short interviews to learn about where they lived, why they visited, how they made the decision to visit, and how likely they were to return or recommend KSCVC to a friend among other things.

By collecting the team’s data and analyzing it, Jen could make better decisions about where to run tv advertisements, what to say in the commercials, and who to direct their budgets toward.

Surprisingly, Jacksonville, FL residents had the “highest propensity to visit” due to its strong military roots. Without having the data to tell them where their visitors were coming from, marketing budgets would be wasted.

Using research and talking to guests every day of the week, helped craft compelling messages and resulted in highly targeted and effective campaigns making KSCVC one of Florida’s Top 5 most visited tourist attractions only after Disney, Sea World, Universal Studios, and Busch Gardens.

Lesson Three: Play to Your Strengths Competing in a top tourist destination with the hospitality industry’s champion (Walt Disney World) is no small feat.

Convincing Orlando tourists to break away from “the mouse” for a day and go on what appears to be an educational field trip, is a huge marketing challenge.

One thing that NASA at Kennedy Space Center doesn’t do is try to be something they’re not.

They hold true to the unique story of human space flight and present it in an entertaining and engaging manner without gimmicks.

They attract the right audience by playing on themes of human adventure, global exploration, and inspiring young minds to think bigger.

Meeting a real astronaut is a possibility for visitors every day at Kennedy Space Center. They leverage the power of their astronaut-celebrities to entice new visitors through the gates.

Jen was on the launch team of the “Lunch With An Astronaut” program in 2001 and its popularity is still rising.

Effective Marketing Can Take Your Business to the Moon

In conclusion, staying relevant through strategic partnerships, putting research first, and leveraging your strengths are 3 key million dollar marketing lessons that any business can learn from NASA.

Look for strategic partnerships that can help you achieve your mission and build your audience, use research to know what makes your clients, customers, patients, or visitors tick, and play to your unique strengths including celebrity relationships, star power, or your unique story. She is the CEO & Founder of Boss Women Rock, which helps women in business reach new levels of authority and profitability.

Jen is a multi-published author and professional keynote speaker.  She is the Editor in Chief of Boss Women Rock™ magazine and host of the iTunes podcast which features entrepreneurial celebrity guests like Loral Langemeier from The Secret.

She is a media contributor frequently appearing on TV and radio including PBS, HuffPost, NBC, ABC, FOX, and CBS.

Jen’s fourth book Boss Women Rock: How to Go From Best Kept Secret to Sought After Expert is now available on Amazon.

Learn more about having Jen speak at your next business growth or leadership event at www.jendevore.rocks

Jen DeVore Richter is a former marketing executive for NASA at Kennedy Space Center turned keynote speaker and marketing strategist. She works with sales and marketing teams to improve marketing results, increase productivity through systems and automation, and launch campaigns that convert. Jen is also the CEO & Founder of Boss Women Rock, an organization which helps women in business make their first $100K in a 52-week program. She is the Editor in Chief of Boss Women Rock™ magazine and host of an iTunes podcast which features entrepreneurial celebrity guests like Loral Langemeier from The Secret. She is a media contributor frequently appearing on TV and radio including PBS, HuffPost, NBC, ABC, FOX, and CBS.